Thank you to everyone who participated in our JMF July School Holiday Clinics across our hubs in Dubbo (NSW), Kuranda (QLD), Tennant Creek (NT) and Borroloola (NT).

In total JMF delivered to over 300 participants with a mixture of activities, including skill-intensive training, traditional Indigenous games and game play. We also served up healthy snacks and a nutritious meal to finish up each session.

A massive thank you to the experienced Football Development Professionals who visited our hubs to provide support and guidance to our dedicated coaching teams. Our special guests included:

Our Dubbo participants also received an extra-special guest player for two sessions, Young Matilda and Western Sydney Wanderers goalkeeper, Jada Whyman. Participants were very excited to meet Jada. She facilitated yarning circles throughout the day and her invaluable input added to the holistic approach of the JMF program, helping to build resilience and connection to culture.

On Wednesday, 15 July in Dubbo, we also hosted the first of many, Coach Development Workshops. The workshop was presented by Football NSW and delivered by Warren Grieve, Andrew Taylor and Andrew Fearnley and was available to the football coaching community in Dubbo and surrounding areas.

The workshop was attended by 15 external coaches and five local JMF coaches. Thank you to Dubbo District Soccer Association representative players, who attended the evening to bring to life the practical component.

All coaches in attendance received 10 FFA accreditation points towards the renewal of their FFA Advanced Coaching Licenses. JMF will look to build on the success of this Coach Development Event, to support the wider Football community in the future as Coach Development opportunities in regional areas are not usually readily available.

To top off our successful holiday clinic program, JMF held two friendly matches, one in Dubbo and another in Kuranda. A selection of JMF’s most committed and talented Indigenous children were selected to make up an even 50/50 gender split team ranging between the ages of 9 – 15 to compete against one of the region’s local football clubs. Both events concluded with our holistic approach and methodology through controlled breathing exercise techniques learned from renowned Sport Psychologist, Dr Noel Blundell.

On Sunday 12th July, JMF’s Kuranda team took on a young Kuranda Rangers side at Bartley Park in a well-organised community event, with families and various local stakeholders in attendance to watch the inaugural friendly match. Our young Indigenous players were sporting the new orange Moriarty Foundation strips in their 5-3 win over the mixed Rangers team. All players showed respect, a resilient positive attitude and had fun throughout the event which was far more important than the final result. We were also very lucky to have Oliver from TRAQS run the catering for the day for all the excited viewers and volunteers. The next round of matches in the September school holidays will hopefully follow the same success.

JMF’s second friendly match was the eagerly anticipated game between the U12 Skill Acquisition Phase team, Western NSW and JMF Dubbo select team, once again achieving a 50/50 gender split across the 9 – 15 age group. With a number of games prior to the 12.30pm kick off, Moriarty Foundation’s new striking Marquee began to draw a lot of interest alongside the enticing smell of the healthy BBQ feast that was being cooked up by our supportive local volunteers.

There were a few stand out moments in the game with community scholar, Marty Boneychillie producing several skillful moves to dazzle the defenders and his younger brother TC who pulled off a number of top saves to keep the orange JMF shirts in the game. Hayley Ann, the youngest player on the field, showed no fear in her tackles against the older boys of Western NSW which gripped the local Dubbo crowd. Football NSW’s Youth Technical Director, Warren Grieve and Youth Development Coach, Drew Taylor The final whistle blew with Western NSW taking the win with a 5-2 victory. On the whole, the day could not have gone any better with engagement from the local crowd, volunteers, JMF staff, players and the families. The recurring discussion on the day was that “we can’t wait for the next one….” 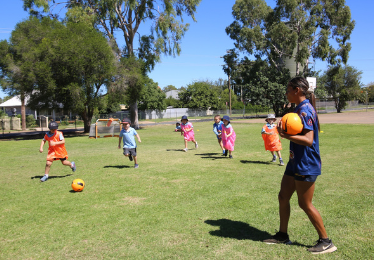